The Teifi Valley Railway is home to an impressive collection of carriage stock that forms an attraction in its own right. Each vehicle, with one exception, was handbuilt at the workshops at Henllan station between 1983 and 2003. 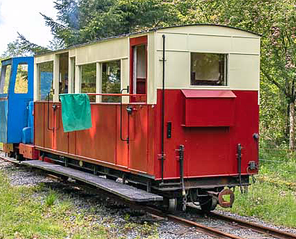 Built in 1983 upon a chassis purchased from the Trentham Gardens railway. Being the first carriage at the TVR, this vehicle is fully fitted out with a guard compartment, observation window, and wheelchair access.

Interestingly, the design was based on coach no.7...scroll down the page for the story!

Since completion, this coach has worn a number of liveries, including brown and cream; blue and gold; green and cream; and the current 'blood and custard.' 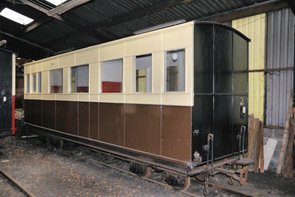 Built in 1984 upon one of the chassis purchased from the Trentham Gardens railway. This carriage has wheelchair access and two doors.

Since completion, this coach has worn liveries including brown and cream; blue and gold; red, white and blue; gold-lined burgundy, and the current brown and cream. 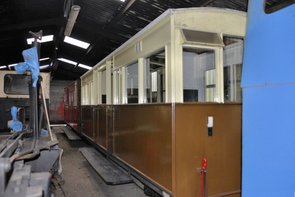 The third vehicle built upon one of the chassis purchased from the Trentham Gardens railway in the mid-1980s.

Liveries have included brown and cream; green and cream. 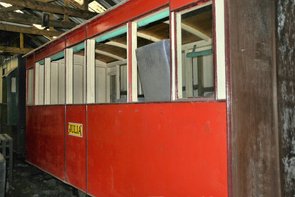 Built in the late 1980s, this small vehicle was popular on summer days being open windowed.

This coach was almost completely destroyed in 2003 by an arson attack in the carriage shed. The bodywork was rebuilt by a workshop in Hereford to a very high standard, matching the original almost identically.

Coach No.5 4-wheel brake with side ducket 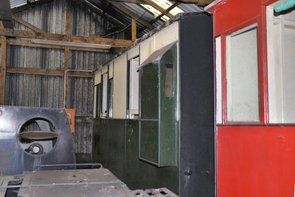 This vehicle entered service in 1994, constructed on the chassis of a flat wagon.

A small fully enclosed passenger compartment sits to the rear of a roomy guards compartment with side duckets either side enabling a view down the entire length of the train. 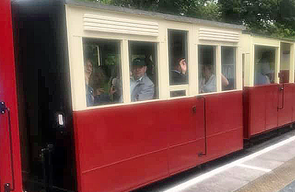 This vehicle entered service in 2003, also constructed on the chassis of a flat wagon. 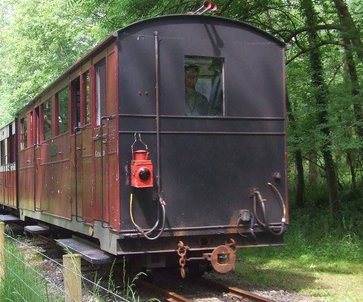 Coach No.7 arrived at the Teifi Valley Railway in 1998, from the Welsh Highland Railway.

Its design inspired TVR Coach No.1, in arrangement and layout.

The mismatch in chronological numbering can be attributed to construction of Coach No.6 having already begun in 1998.

A complement of goods wagons support the railway's operations, including construction of extensions and permanent way maintenance.