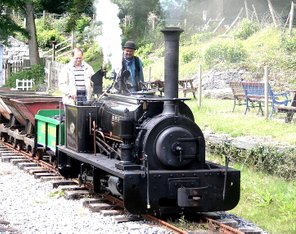 Alan George was built by the Hunslet Engine Company, Leeds in 1894, and assigned maker's number 606. One of many distinctive engines that have come to typify the North Wales narrow gauge quarry workings, known as 'Quarry Hunslets'. The engines were used on the high level workings and doubtless had a hard working life, with minimal maintenance and running over poor quality track.

The outside frame arrangement and low mounted boiler and saddle tank make the engine very stable, while the large cylinders give plenty of power! The firebox is very wide and short, and the engine required careful attention to ensure there is plenty of steam just when it is needed.

In 1953 the engine was laid up and abandoned until sold into private ownership in 1965, which is when the slate quarry lines closed.

The locomotive came to the railway in 1983. It originally had its own engine shed, before the modern carriage shed was built later on. This was situated roughly where the wishing well is located in the car park today.

Since then the locomotive has received regular care and overhauls, sporting a number of liveries, including metallic green; red and blue lined black; and plain black, as it likely wore at Penrhyn.

Alan George is currently undergoing an overhaul. The strip down is well under way.

Any contributions or support in bringing this small Quarry Hunslet back into steam will be gratefully received. Find about more by contacting us, or finding out ways to support the railway. 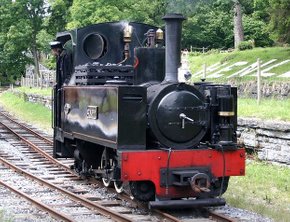 Sgt. Murphy is a Kerr Stuart built locomotive, one of a type developed for wartime use. The design was a development of another Kerr Stuart type, the Joffre class, which was mass produced for deployment in the trenches during World War 1.

After the First World War Sgt. Murphy was used by the Admiralty at Beachley Dock at Chepstow, Monmouthshire until being sold to A. H. Richards dealers of Chepstow. It was acquired from Richards in 1921 by Penrhyn Quarry.

In 1932 Sgt. Murphy overturned in the quarry, killing its driver. The accident was attiributed to poor weight distribution, and was rebuilt at the railway's Coed y Parc workshops, with the boiler lowered by more than 7 inches.

It received a new firebox in May 1938 and new side tanks in 1945. In January 1955 it was officially noted as 'scrapped' and left in the scrap line at Coed y Parc.

Sgt. Murphy was purchased by Messrs Pealling and Weaver and moved to Staffordshire in 1964. By 1976, it was at Teddy Boston's Cadeby Rectory by 1976, laid up in a siding in pieces. In 1977 it arrived at the Betws-y-Coed Railway Museum. At the end of 1991 it went to Winson Engineering at Penrhyndeudraeth, where a trailing bogie was added beneath the cab, resulting in the locomotive technically becoming an 0-6-2.

The locomotive resided for a period at the Ffestiniog Railway in North Wales, from which it visited the Teifi Valley Railway in 1994 for Alan George's 100th birthday gala.

In July 1996 it moved to the Teifi Valley Railway. This rare locomotive (the only one of its type remaining in the UK) has since worn a number of impressive liveries, including black and red line black; plain black, and period correct War Department green.